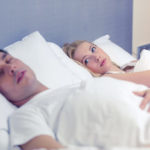 Snoring Awareness Week is officially underway! From Monday 22nd to Friday 26th April, general awareness of snoring, its causes, and its effects, will be raised all over the UK.

Nobody needs to suffer as a result of snoring, least of all partners!! Snoring is a treatable condition which is an important message of Snoring Awareness Week and in 2019 there is a special focus on the diagnostics involved with determining a condition, ahead of treatment. A raised level of awareness is good news for snorers, their bed partners, and the NHS, which channels a significant amount of resources into snoring-related conditions.

What is sleep apnea?

Loud snoring is one of the most prominent symptoms of sleep apnea; a condition in which breathing stops and starts repeatedly. Those who suffer from this disorder can feel tired, despite having a full night’s sleep.

Aside from loud snoring, other symptoms of sleep apnea include; stopping breathing during sleep, which can be reported by a bed partner; headaches in the morning; a dry mouth in the morning, gasping for air while sleeping, sleepiness in the day time; and difficulty staying asleep.

How is sleep apnea linked with heart health?

Sleep apnea can cause cardiovascular issues because the condition can involve a sudden drop in blood oxygen levels. This increases blood pressure and can place a strain on the cardiovascular system, as well as causing hypertension (high blood pressure). Obstructive sleep apnea can also increase the risk of abnormal heartbeats such as atrial fibrillation, recurrent heart attack and stroke. For those suffering from heart disease, repeated drops in oxygen level can potentially be fatal. Importantly, treatment for sleep apnea can improve the success of managing heart related conditions such as atrial fibrillation.

Snoring Awareness Week 2019 is an apt time for snorers and their bed partners to remind themselves about the signs of sleep apnea. This is a good opportunity to be assessed and focus on improving your heart health.