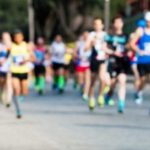 Since its inauguration in 1981, up to 40,000 runners a year take part in the London Marathon. The runners are cheered on by masses of supporters as they make their way through the arduous 26.2 mile course that takes them around various landmarks in East London before crossing the finishing line on the Mall. It provides those who participate with a great sense of achievement and millions of pounds are raised for charity by these runners who are sponsored for completing this remarkable feat.

Sadly this year Matt Campbell became the 12th runner to die during the race. Matt was known to many (including me) as the talented semi-finalist in Masterchef – The Professionals. He had just recently completed the Manchester Marathon in 3 hours and was running the London Marathon for the Brathay Trust. The cause of his death is yet to be confirmed.

Looking back at the history of the Marathon, it is ironic that the first death in a Marathon was of Pheidippides – the central figure in the story that inspired the concept of the modern day Marathon. Pheidippides is said to have run from Marathon to Athens to deliver news of a military victory against the Persians at the Battle of Marathon. On completing the 26.2 mile run and delivering the message, he collapsed and died.

Looking through all deaths in Marathon races, the most common causes of death documented are:
1. Sudden cardiac death triggered by a congenital or acquired heart disorder;
2. Exercise-associated electrolyte imbalance (low salt levels in the blood);
3. Heat stroke

Runners looking to compete in the Paris Marathon are not allowed to enroll without a ‘fit note’. This race has been run in its current format since 1976 with up to 50,000 runners a year participating. Curiously, there have been no deaths in the Paris Marathon and this may be attributed to the mandatory requirement of the doctor’s fit note. This fit note typically requires a history to ensure no symptoms of underlying heart of systemic disease as well as a physical examination along with blood tests and an electrocardiogram (ECG) test. Further investigations are undertaken if any abnormality found – these can include an echocardiogram, 24-hour ECG and exercise test to assess for cardiac structure and heart rhythm abnormalities.

Having personally run the New York Marathon in 2000 and the London Marathon in 2005, I can personally vouch for the physical challenges these races inflict. My belief is that any one of us can run the first 20 miles. It is the last 6.2 miles where the challenges and risks become pronounced. Now at the age of 43, I put on my running shoes for no more than a 5k Sunday jog.

As a result, I have tremendous respect for those people who take on this challenge. However, I would encourage anybody enrolling regardless of age, gender or ethnicity to seriously consider getting a fit note even if this is not currently required for enrollment. My sincere hope is that all Marathon events follow the lead set by the Paris Marathon committee in terms of a mandatory fit note.